Getting a tattoo to remember a loved one or celebrate a special occasion may seem like a great idea at the time, but an average of 20% of people end up regretting their decision to get 'inked'. Stretch marks from pregnancy or weight change, the natural aging process, and changes in personal preference leave people dissatisfied with their tattoos but while they were once considered to be permanent, now lasers are being used to successfully remove all types of tattoos.

In the late 1970s, lasers were introduced as a means of removing tattoos; however, the CO2 laser that was available then caused scarring as it removed the outer layers of skin quite aggressively. It was also remarkably painful as anaesthetic could not be used with these types of lasers. The earliest recorded test case took place in Oregon in 1979 when 28 individuals were operated on with rather varying degrees of success. It was not until the late 1980s that the Q-switched laser was introduced on a commercial scale and this was the start of laser tattoo removal as we know it today.

The Q-switched laser operates by sending short pulses of intense light through the top layers of skin to target the tattoo pigment. The specific wavelengths of light then react with the ink and break it down to smaller pieces which the body can then absorb and remove with the aid of a healthy immune system. In the early 1990s, the Q-switched lasers were each calibrated to target a different range of the colour spectrum as different colours of ink needed to be targeted with different wavelengths of light. In the United States, the FDA did approve certain gels that could be applied to the tattoo allowing one laser to target a combination of different colours, but it was not until 2006 that newer models were introduced that worked on multiple wavelengths to target multiple pigments. Black and blue are still considered the easiest colours to treat.

The procedure involves going for an initial consultation to see if you are a suitable candidate for laser tattoo removal. They will take into consideration the colour, age, size, type, and location of the tattoo as well as your skin colour and condition. From this they will be able to inform you of how many sessions you will probably require in order to fully remove the tattoo. Remember that this is not a definitive answer and it is sometimes possible to need additional sessions if the tattoo has reacted abnormally to the laser, as has been known to happen with coloured tattoos containing pink or flesh tones. Your sessions will be spaced at least six weeks apart to allow sufficient fading of the tattoo. If you have a tattoo that was done with the newer brand of ink called 'InfinitInk', you will require only one visit to the clinic.

Upon entry to the clinic for your first session, the area of the tattoo will be cleaned and a topical anaesthetic applied. Depending on the patient's tolerance for pain, a general anaesthetic could also be used. It should be noted that if using Lidocaine cream, one or two additional sessions may be required since the cream reacts with the tattoo pigmentation making it more difficult for the body to absorb it. The pain will also depend on the size and location of the tattoo, and whether the tattoo has been layered on top of another one as a 'cover up' tattoo. It has varyingly been described as being anything from only a sharp pinch to hot oil burning the skin. The time that the session will last also depends on the size of the tattoo, ranging from a few minutes to a couple of hours.

After your session is complete, it is essential that the after-care instructions are followed correctly. It is normal for there to be some bleeding that leads to a crust forming over the tattooed area. Cleaning the area with mild soap and water, applying prescription antibiotic cream, and changing the bandage regularly will decrease the change of infection and the recovery time. Your follow-up laser removal session should be scheduled 6-8 weeks later to allow time for maximum fading of the tattoo. The success of the procedure strongly depends on the patient's immune system because a weak immune system will not be capable of expelling the broken down tattoo pigmentation. 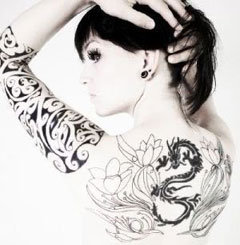 Laser tattoo removal may seem like a simple procedure but there are many side effects that a patient may suffer from. Due to the advances in laser technology, textual changes such as scarring rarely occur, but people with darker skin tones have been known to suffer from hyperpigmentation (dark spots) or hypopigmentation (white spots). This is a result of the skin around the tattoo absorbing the light from the laser. Fortunately these are mostly temporary, fading after 6-12 months. Another rare but possible side effect is the development of a bulla, a large fluid-filled blister that will need to be surgically drained. Regular applications of a cool compress or ice pack are often suggested to limit the possibilities of bulla occurring. More common is the tattoo darkening, rather than lightening, in response to the laser. This is likely to happen if the original tattoo contained light colours or was a form of permanent makeup. These often turn black and are then treated as such during the next session.

Removing tattoos by laser is considered to be the safest way of removing a 'permanent' tattoo; however, it is costly, time consuming, and not without risks. Patients should insist on a patch test prior to the first full treatment to ensure you do not have an allergic reaction. Rather than being allergic to the laser light itself, some patients have allergic reactions to the tattoo ink as its composition changes. If this occurs, it can be treated with oral antihistamines or anti-inflammatory steroids.

The removal of tattoos is growing in popularity among people who regret the decision, are unhappy with the finished tattoo, or find it detrimental to their career. Previous methods of skin grafting to cover up tattoos, or dermabrasion to remove the layers of skin including those that contain the tattoo pigmentation were painful and unreliable. Now the use of lasers to remove unwanted ink has become the standard method. While the best candidates are fair-skinned people with dark tattoos, advances in laser technology is making it possible for even slight contrasts in colour to be detected so treatments may be effective on people with darker skin and coloured tattoos. If you are a suitable candidate, the next issue is the cost of the procedure. A consultation at a reputable clinic will include a quote per session that is likely to range from $100 to $1000 depending on the size and type of tattoo. The number of sessions needed will also vary and can range from 3 to 20. Unfortunately, this is considered a cosmetic procedure and will not be covered under an insurance plan. Clinics tend to offer payment plan and financing options to help patients afford this life-changing procedure, and certain governments will cover the cost of removing gang-related tattoos.